Since 2013, Amasty actively participates not only as speakers but also as contributors and sponsors of MM (and not only) events.

Why do we do this?

Being in e-commerce business for 9+ years, we feel involved in the common Magento cause. We are happy and proud to be a part of this and to contribute to the Magento Community strengthening and development. In this post, we gathered all the events we took part in as sponsors.

Amasty is a support sponsor of Magetestfest

Today we are glad to announce that Amasty is to sponsor the MageTestFest for the second time. On March 5-8th, 2019 the international event gathers authoritative Magento developers in Florence, Italy to speak about testing and clean coding on Magento 2.

Magento 2 has strong capabilities for testing, such as unit tests and patterns. However, to create indeed top-performing extensions, you should keep pace with the coding trends. MageTestFest is exactly the place to get insights into this field. That is why Amasty is happy to support this cool meet-up.

Today we want to share the good news with you. We are proud to say that Amasty is supporting the Contribution Day with a Gold Sponsorship and Magento Live EU with a Bronze Sponsorship in Barcelona, Spain. The events will take place on October 8, 2018, at Palau de Congressos de Catalunya and last till October 10.

The attendees will be able to learn how to use key marketing features of Magento 2, create promo campaigns and start a coupon-driven shopping cart promotion. The workshop includes using Magento Business Intelligence to determine in-store bestsellers; using Magento CMS functionality for content development; creating customer segments, related product rules and many more. See a complete description of the workshop schedule on the registration page. Also, you have a great chance to enjoy the evening before MLEU with the Magento Community at the famous Pre-Party.

Amasty Is A Silver Sponsor of MageTestFest

We're happy to inform you that Amasty is sponsoring MageTestFest, an international developer event devoted to clean coding via testing.

In the last couple of years, testing has become a more significant topic in the Magento world, as building solid complex e-commerce systems just can't be real without deep testing. We're happy to support the event and thus to make our contributions into this topic.

We're excited about the event! Amasty's Pavel Barbarich, the Head of Amasty Development Department, is visiting the conference as well. Please come up and say hello, he'll be happy to chat about all things Magento.

What we love about Magento events is that there is no dead season in the Magento community. Are you going to visit Magento Live UK 2017?

If yes, we'd love to meet you there! These team members are going to be at the event. Feel free to come up, say hello and talk all things Magento. Or if you want to schedule a business meeting, feel free to contact Victoria and Andrei:

We're happy and honored to sponsor the Networking Breakfast at Magento Live UK on June, 27-28. The agenda of the event is really impressive! We can't wait to see the presentations of the wonderful speakers, including the Magento team members as well.

There will be four tracks  - business, technical, innovations and commerce ones, interactive sessions, and lots of networking opportunities. On June, 26, there will be a Magento Contribution Day workshop with Magento Director of Community Engineering Max Yekaterynenko and his team.

As a company that does care about the community and has organized two Meet Magentos in Belarus, as well as participated in a lot of events around the globe, we're extremely proud to support one of the biggest conferences in the Meet Magento world.

As always, we're looking forward to the new business opportunities and meeting current and new partners there - everything that will help us make excellent extensions and provide Magento merchants with ultimate services.

Amasty is a Silver Sponsor of Meet Magento Russia

Amasty team is preparing for Meet Magento Belarus 2015 (have a look - we have some great speakers announced), but we are also excited about what is happening in the international Magento community. Hence, some news from our close friends!

Our colleagues from Meet Magento Russia have announced the date of the event: October 30, 2015 is the day when Moscow will be hosting the conference. The event is organized by Astrio.

We're also happy to announce that Amasty is a Silver sponsor for Meet Magento Russia 2015, and we're glad to collaborate and to support the Magento community. 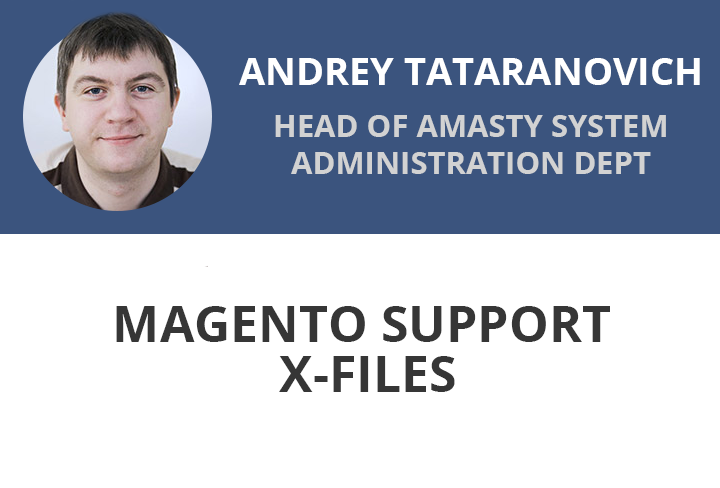 This is the second time Amasty sponsors Baranki Cup - an intellectual games contest, organized for young boys and girls (follow the link to see the last year recap). The event took place on March 14-15 in Baranovichi, a city in Belarus. 35 teams of young mind game lovers from all over the country came to compete in several types of contests.

We're proud that Amasty Magento developer Ruslan was one of the event organizers.

- Ruslan, you are involved into Baranki Cup organization for the fourth time. How come you’re so keen on into intellectual games? Was the 2015 cup different from the previous ones?

- I have been playing What? Where? When? since I was 15 years old. When I was a schoolboy, there wasn’t such an intellectual games festival, and we wanted it to appear. What is more, for me organizing such events is even more joyful than playing the games.

This year everything went superb, which is proved by the event reviews. This year we won the Best Youth Competition nomination by the Belarusian League of Intellectual Teams and showed a new approach to competitions, where we emphasize emotions, good vibes, first class supporting music. This is our know-how, and our country doesn’t have any analogs so far.

The latest event was even richer: emotions of coaches, organizers, and children, meeting new friends, new contests… You just can’t forget such a wonderful adventure. 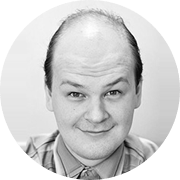 What? Where? When? is an intellectual game show well known in Russian-language media since 1975. Today it also exists as a competitive game played in clubs organized by the World Association of Clubs. Over 21 000 teams worldwide play the sport version of game. 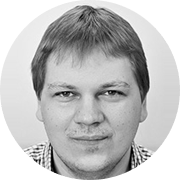 Andrei, Chief Technology Officer at Amasty, explains why the team was so excited about supporting this event:

- Here at Amasty we do believe that the next generations should exceed us in intelligence and knowledge levels. That's why we contribute to Baranki Cup in every possible way. We see this as a method of helping young people in establishing self-confidence, expanding their knowledge and achieving something better. 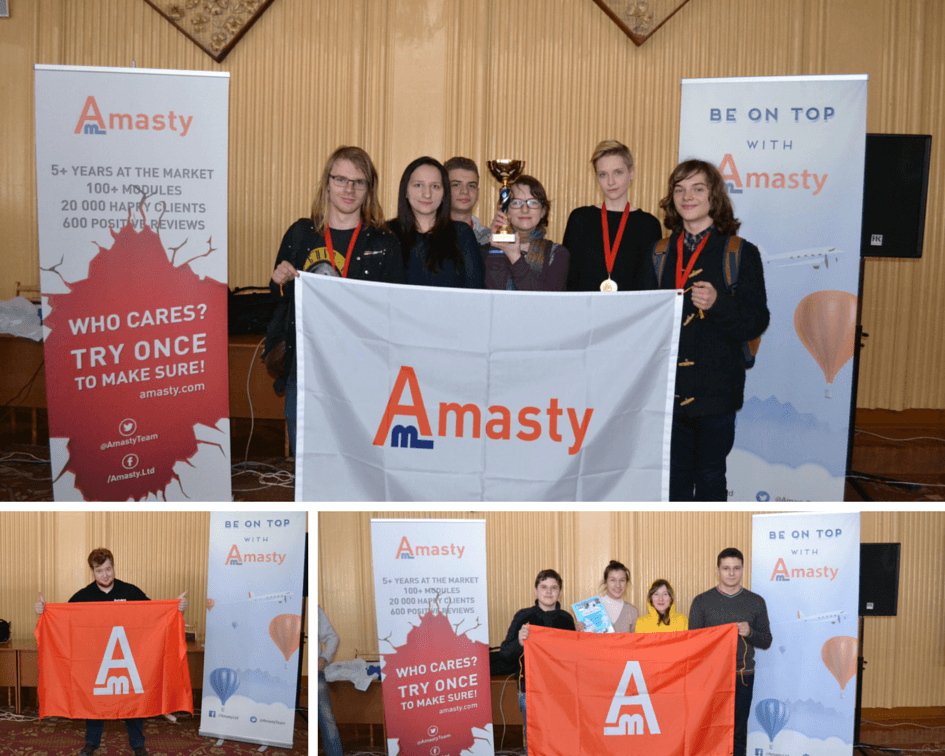 Amasty has always paid great attention to the events that help one to become a smarter and better person. We sponsored conferences and took part in a number of Magento events. Recently youth intellectual movement caught our eye. A few of Amasty Team members are keen participants of Belarusian intellectual games movement and one out of them, Ruslan Ogorodnik, took this weekend a great part in organizing a youth intellectual event in Baranovichi. Amasty decided to support this initiative and became a sponsor of Baranki Cup 2014.

The Baranki Cup, which took place March, 15-16, is an annual event organized in Baranovichi, Belarus, for school children from all over the Republic. It is the third Cup on intellectual games held in Baranovichi and every next year the event is attracting more and more participants. This year 25 teams from more than 10 cities and villages of Belarus came to compete for the Baranki Cup, which is more than 150 participants. The event included 6 games, which came into the account of the Cup, as well as some more optional ones. 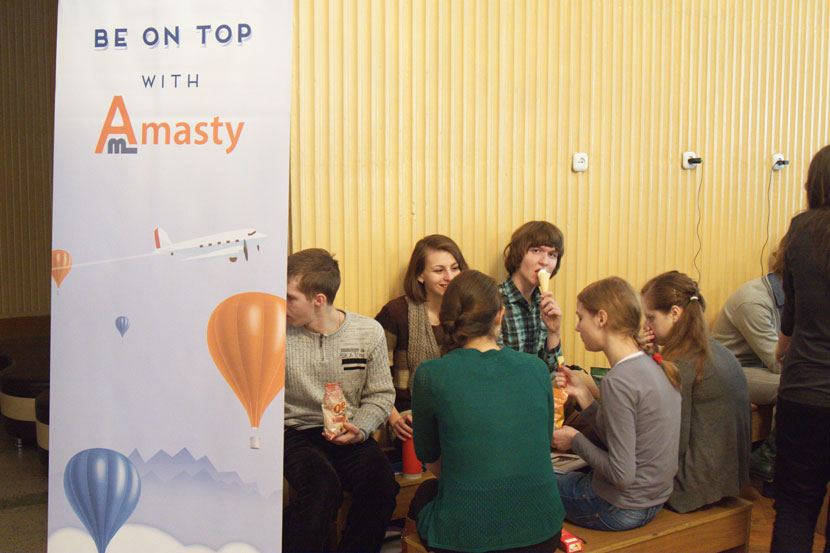 To give you a better understanding of what intellectual games are about, we suggest you answering a question from the game called “What? Where? When?”. Try to guess what the answer is and check the correct variant in the end of the article:

The advertisement of American Express cards claims that the lost cards will be returned to you and in case you lose them you will become the owner of a card again. In this advertisement a card has a shape of an ancient weapon. What is this weapon?

All in all there were 48 questions of this kind asked at the Baranki Cup not to say about the plenty of other games. The winner managed to answer correctly to 36 out of 48 question in What? Where? When?, which guaranteed him the first place in the Cup.

Amasty sponsored the prizes for all the winners of the event. We hope the board games they have won will become a nice reminder about Baranki Cup 2014. This event is known for its great creative atmosphere, and though the photos below can’t reflect it to the fullest we invite you to have a look at them anyway.

By the way, the correct answer to the question above is Boomerang, since the American express card as well as the boomerang always returns to its owner.

4 days in paradise with Amasty
Amasty as a sponsor

First component is lots of code, of course. During the conference this part is brought to reality with hack-sessions, lectures and discussions. Second component is fun. Sun and sea, water activities, historic sights and picturesque Palma de Mallorca. Well, code and fun in the sun are great, however something is missing in the puzzle. The last and the most important component of developer’s paradise is Magento. Magento is what unites us, that’s why the major emphasis is put on knowledge exchange, which is the basis of Developer’s Paradise conference. Why we decided to become a sponsor for Developer’s Paradise? We believe in great mix of code and fun as a great platform for knowledge exchange and networking. We invite you to the paradise which takes place at the beautiful Balearic island of Mallorca, Spain from September 16th to 19th, 2013. You can find all the details concerning the conference here: developers-paradise.com/.

Amasty is eager to support Magento conferences because we believe code quality matters and are striving to create high-grade Magento extensions to save time, effort and nerve for the ecommerce community. We believe in Magento events as a source of inspiration for creation of great solutions and community development.

At Amasty, we care about young talents and the Magento Community. We actively participate in Magento events as sponsors and speakers all over the globe. We are extremely happy to support exciting events in the Meet Magento world.

Do you want to hear top representatives sharing information on what's coming next in e-commerce?

Stay tuned and subscribe to our newsletter for not to miss the forthcoming news!

Alina is heavily into natural language expression in real life and technical one in blogging. She believes self-enhancement and spot-on goal setting contribute to any project's success. At out off-work time she is open to tattooing, sketching, and doing oils. 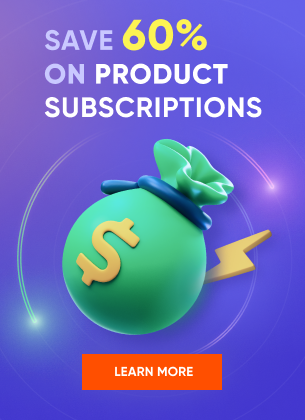